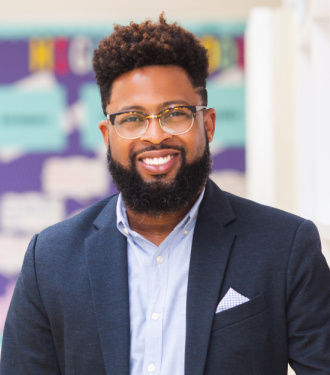 Barry Omar Brinkley, Chief of Staff, returned to DC Prep in 2021. He previously served as the Dean of Student Support at the Edgewood Elementary Campus from 2009- 2011. Prior to returning to DC Prep, Barry served as the Founding Site Director at College Track DC Ward 8, building and designing college access programming and support to students attending several Ward 8-based schools. He previously served as the Executive Director of Equity in Student Achievement for Guilford County Schools in North Carolina and as a Student Support Consultant for Turnaround For Children in Washington DC. He started his career as a 4th grade teacher in Compton California. Barry has a MA in Elementary Education from Loyola Marymount University in Los Angeles and a BA in Psychology with a concentration in Family and Child Development from the University of North Carolina at Chapel Hill. Barry was a member of the 2017 cohort of the School Systems Leaders Fellowship with Cambiar Education. He was also a 2018 American Express Leadership Academy Fellow with the Campaign for Black Male Achievement. Barry currently serves on Teach For America’s National Advisory Board of The Collective, the organization’s national association for alumni of color, where he provides strategic guidance to Teach For America’s senior leadership.